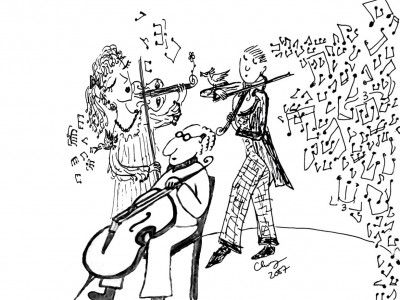 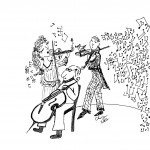 Shorelinewas inspired by a short story of the same title by author Janelle Evans. When composing Shoreline,I was inspired by the story’s opening image – a woman wandering along the shoreline, calling out to an absent lover. The music similarly starts with this lonely cry, which is answered only by the silence of the sea.

The music changes as we flashback to the woman’s past. We learn she is half- human and half-mermaid. Raised by her human father, she knew nothing of her mermaid mother and her non-human heritage. On her wedding day, a stranger from the sea approaches her. They dance together, and he asks her to come back with him to the sea before it is too late. Shocked to discover she is not completely human, she falls back on convention and refuses. In turn, the stranger warns her that a human husband would not completely accept her.

Eventually, this prediction comes true. When her non-human self begins to emerge, her husband grows disgusted and shuns her. Years later, he dies at sea, but she does not miss him. At this point, we return to the present, with the woman roaming the shoreline, calling out to the mysterious stranger of the sea.

Janelle Evans’ story made me think of life, how fleeting and lonely some moments can be and how one decision can affect the rest of one’s life. Self-acceptance versus conformity, the desire to belong despite one’s differences, and the transitory nature of rare opportunities – these are all very human themes, conveyed poignantly in Evans’ story and further explored in my music.

In Snapshots, I became interested in re-connecting with the playful aspects of the creative process that had first enchanted me as a child. Snapshots therefore embraces qualities of rebirth and renewal with spirited gusto.

In this one-movement, perpetual-mobile work, moments fly by so quickly that only impressions (or snapshots) of an experience can be felt. Snapshots also refer to rapidly crescendoing ‘whooshes’ that whirl throughout the piece. This is similar to life hurling its curveballs, throwing one off-balance as one tries to adapt to life’s ever-changing moments. There are, however, slow and introspective moments, to remind oneself of one’s inner fortitude, despite the turbulence on the surface.

A unique feature of Snapshots is its keyboard part, which requires the pianist to play the piano and celesta simultaneously. This idea originated from my teenage years, during which my composition lessons took place in a room where one of the pianos was tuned a quarter-tone flat while the other was tuned normally. Given my composition teacher had perfect pitch, I enjoyed some devilish fun, playing both pianos to greet my teacher as he walked in. As Snapshots is the first piece in which I have specified this two-keyboard setup, the writing itself is traditionally idiomatic. I imagine, though, that this arrangement could be explored further to lead to new and interesting possibilities.

The Piano Quartet is an exploration of darkness, silence, and inner space. While composing this work, I read Edgar Allan Poe’s sorrowful and haunting Ligeia for inspiration. I was struck not only by the emotionalism of the story, which dramatizes the loss of a loved one, but I was fascinated by the unhurried, musical flow of Poe’s writing. While composing the Piano Quartet, I allowed a certain slowness into the process. At the same time, I sought to give a few chosen ideas the space and breathing room necessary to manifest as their most beautiful and perfect forms.

I am honored to dedicate this piece to Marc Neikrug and this performance in the memory of my father, who passed away last spring.

I cannot, for my soul, remember how, when, or even precisely where, I first became acquainted with the lady Ligeia. Long years have since elapsed, and my memory is feeble through much suffering. Ligeia! Ligeia! It is by that sweet name alone that I bring before mine eyes in fancy the image of her who is no more.

In beauty no maiden ever equalled her. She was the radiance of an opium-dream – an airy, wildly divine, spirit-lifting vision. And her learning – it was immense. With how vivid a delight – did I feel, as she bent over me in studies sought but less known, I might at length pass onward to the goal of a wisdom too divinely precious not to be forbidden!

How poignant, then, must have been the grief with which, after some years, Ligeia grew ill, and I saw that she must die. For long hours, would she pour out before me the overflowing of a heart whose more than passionate devotion amounted to idolatry. How had I deserved to be blessed by such confessions? How had I deserved to be so cursed with the removal of my beloved in the hour of her making them. But upon this subject I cannot bear to dilate. Let me say only, that in Ligeia’s more than womanly abandonment to love, alas! all unmerited, all unworthily bestowed, I at length recognized the principle of her longing with so wildly earnest a desire for the life which was now fleeing rapidly away.

At high noon of the night in which she departed, beckoning me, to her side, she bade me repeat certain verses. I obeyed her:

Lo! ’tis a gala night
Within the lonesome latter years!
An angel throng, bewinged, bedight,
In veils, and drowned in tears,

Sit in a theatre, to see
A play of hopes and fears,
While the orchestra breathes fitfully
The music of the spheres.

Mimes, in the form of God on high,
Mutter and mumble low,
And hither and thither fly –
Mere puppets they, who come and go

At bidding of vast formless things
That shift the scenery to and fro,
Flapping from out their Condor wings
Invisible Wo!

That motley drama! –oh, be sure
It shall not be forgot!
With its Phantom chased forever more,
By a crowd that seize it not,

But see, amid the mimic rout,
A crawling shape intrude!
A blood-red thing that writhes from out
The scenic solitude!

It writhes! – it writhes! – with mortal pangs
The mimes become its food,
And the seraphs sob at vermin fangs
In human gore imbued.

And the angels, all pallid and wan,
Uprising, unveiling, affirm
That the play is the tragedy, “Man,”
And its hero the Conqueror Worm.

“O God!” half shrieked Ligeia –”O God! O Divine Father! – shall these things be undeviatingly so? – shall this Conqueror be not once conquered? Who – who knoweth the mysteries of the will with its vigor?” And now, as if exhausted with emotion, she suffered her white arms to fall, and returned solemnly to her bed of death. And as she breathed her last sighs, there came mingled with them a low murmur from her lips: “Man doth not yield him to the angels, nor unto death utterly, save only through the weakness of his feeble will.”

That she loved me I should not have doubted, and I might have been easily aware that, in a bosom such as hers, love would have reigned no ordinary passion. But only in death, was I fully impressed with the strength of her affection.

This one-movement String Quartet is as a highly-dramatic work, set in a fast-slow-fast structure, with the inclusion of a presto fugato in the middle. The compositional goal for this work was to create a piece which incorporates a clear sense of direction and which maintains a high level of intensity from the beginning to the end.