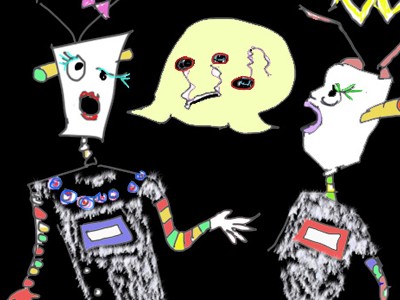 No Guarantees is a work-in-progress musical comedy by composer Cynthia Lee Wong and librettist Richard Aellen. The story takes place in a future America, where androids are increasingly commonplace. No Guarantees explores a future increasingly mediated by technology where people prefer texting to talking, tweeting to meeting, and the comfortable companionship of androids to the messy conflicts of human relationships.

Five scenes from No Guarantees received sold-out performances at the University of Nevada, Las Vegas (UNLV) in November 2018. The Creative Team currently seeks collaboration and feedback from opera and theatre companies, who would be interested in producing the world premiere.

The development of No Guarantees received funding from OPERA America’sOpera Grants for Female Composers program, supported by the Virginia B. Toulmin Foundation.

A futuristic comedy where a secret attempt to use an android has unexpected consequences.

Love can’t be guaranteed…except when programmed into an android designed to be the perfect mate. Still in love with an ex? No problem. Model your android after a former lover. But when that lover shows up and wants to use the android for her own purposes, the lines between reality and illusion blur, and love wreaks havoc in a world otherwise programmed to perfection.

“It was a creative and rewarding experience for our UNLV music students to work with a living composer on a brand new work. They benefitted from the one-on-one collaboration with [the composer] in which [Wong] helped adapt the vocal lines as necessary to fit their specific vocal capabilities. In addition, the roles [Wong] wrote them challenged them dramatically to explore the physicality of androids. Finally, the electronic and multi-media elements of the production gave them a unique contemporary opera experience, as did witnessing the post-performance talk-backs with the audience.

On a personal level, I had great fun playing the part of Skye. I found [Wong’s] vocal writing to be quite singable, and the character was well-written and clearly portrayed by the music. I especially appreciated the amusing musical quotes (Salome, Don Giovanni) and subtle political jokes that brought great humor and flair to the opera. I look forward to hearing the full version of No Guarantees when it is completed, and to hearing about its world premiere with a professional opera company.”

“Working with Cynthia and Richard on No Guarantees was an artistic joy and a collaborative treat. Each of them has such a playful sense of creation, and it shows in the work itself, which is charmingly witty, tuneful, and timely. I’ll be first in line to see the fully-developed poignant romp that reminds us: there are No Guarantees!”

“I know this sounds strange, but working on No Guarantees was one of the most healing experiences I’ve had in my life thus far. I was given the role of Jay Newman at a time in my life when I, like Jay, was stuck in the past over an ex. As such, I really took to the character and worked hard to make sure that I was able to bring him and this show to life as best as I could. The thing that I really loved about this show was being able to discover how hilarious, relatable, and beautifully human it is. It’s a very silly show for sure, but underneath that silliness, there lies sweetness and sincerity. The show itself was an absolutely unforgettable experience, and I’m so honored that I had the chance to be a part of something so special.”

“I thoroughly enjoyed working alongside UNLV faculty and fellow students in the workshop production of No Guarantees. It was an absolute honor to collaborate first-hand with both composer Cynthia Lee Wong and librettist Richard Aellen. Wong consulted with each of us singers and tailor fit the music to fit our individual voices. Aellen provided us with great insight into the story and characters. I loved portraying the role of the strong, independent, and compassionate Dara Green. I am forever humbled to have been selected to be part of bringing this incredible new work to life!”

“Singing the role of Maddie-2 in the musical No Guarantees was a lot of fun and an amazing experience. The music was challenging but delightful to learn and sing, and I felt a lot of improvement in my acting skills by playing this very amusing role. This performance has been one of the best for me in Vegas. The premise of the play is original and creative. I wish I could sing this role again in the future.”

Richard Aellen is an award-winning playwright and author of five novels. His play NOBODY, a finalist at the O’Neill Playwrights Conference, was produced at Alabama Shakespeare Festival in March 2010. He is librettist for WICKED MOON produced in March 2011 at the 4th Wall Theatre and co-librettist with Anita Gonzales and composer Errollyn Wallen of LIVERPOOL TRADING, currently in development with support from University of Michigan and Rythmcolor Associates. Richard’s novel REDEYE was optioned by Warner Brothers for whom he wrote the screenplay. Awards and grants include the 2006 Stanley Drama Award (Farmers of Men) 2008 Charles M. Getchell Award (Nobody), National Endowment for the Arts Grant (film Teenangel), Writers Guild of America/East Fellowship (Lost and Found), Delacorte Press Prize (Ozzy on the Outside), and the 2010 BMI Harrington Award for Creative Excellence. Richard is a member of Dramatists Guild, WGA East and BMI Musical Theater Workshop.