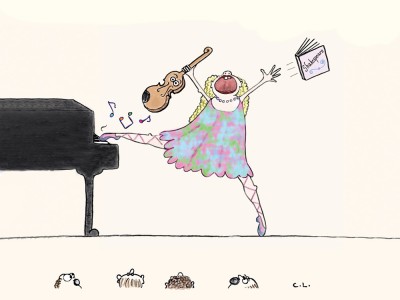 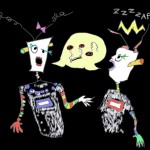 With Chamber Ensemble or Multiple Singers

Based on poetry by Amy Frances

In this country rounded by mountains
a tree is our symbol
Today is market day
in this April morning
There is everything in this broad market
Potatoes, onion, cheese, animals
Children run from one side to the other
A dog barks and a woman shouts: Darn good drink!
Black birds darken the sky
People seek hiding places
The streets are painted in red
The flame is the master
Dry marks in the spirit
But the tree always remains in our hearts

Premiered on October 19, 2013, at the College of Saint Rose by mezzo-soprano Susan Hermance-Fedak and pianist Evan Mack

Curdled, silky moon, pockmarked and expired
You are lucky we have so many disparate uses for you
Otherwise one of the supreme beings
Would have thrown you out a long time ago—you’re lucky you’re so many different things to us
That none of them have been able to think of one thing
To replace all of you
Despite how stale and sad you are.

The young, young girl had never known
What to do around old, old, old, old men
What if anything to say to them?

When if ever to give way to their
Strange demands and casual slurs
That don’t offend her personally
But she certainly has dear, dear, dear, dear friends
Who would be

Everyone must be good to their best, best friends
The old man said, his eye neither milky nor cracked
His head neither spotted nor shiny

Truth is patient.
Truth waits.
Truth will be there
When you get home today.

I had a vision the other day
I know I made it up
But I saw it, if not in front of my eyes
Inside of my brain

I saw a star on the ground
That I almost stepped on
Then picked up, like I would a shiny penny
Smiling at me

I carried it with me always
It stayed with me forever
Inside my pocket, until I remembered
That I was alone

Sitting on a bench
Drinking my coffee
Quietly

When I met you, you were so interesting
Far more interesting than other boys I knew
Just as interesting as any boy in a book somewhere
That is how it began.

Then countless days came and went
None of them with my consent
And you defeated me
Even as you nurtured and completed me
Yes, you eventually defeated me

I was so blank and dull,
Far more than I’d ever been before
Just as blank and dull as a blank piece of paper
And a dull, broken pencil
Who have no stories for each other
And nothing to say forever.

And I thought maybe that’s all the time I should spend
On something with no beginning or end
For ends and beginnings, especially ends
They help us recover, they make us mend.

To do anything as loud as you can is a vast ecstasy.
It’s like all the walls can’t stand your sonic sphere, expanding like it is
the air tastes like mint, is mint and the second you stop
is the second you make the world gasp for air, is the second that you
sink and you’re the ink that bleeds out of the bleached shirt.

I used to sing, and now I howl. But if I howl, it’s for resonance, the depth,
not the snarl, the upward coil. If I howl, it’s so something of me may
ring in your ears.

I may be the only one
Who suffers
When you put on your coat and hat,

I may be the only one
Who hurts when you do that.

But if you take off your shoes,
Then I’ll know
You surely mean to stay.

Oh if you take off your shoes
I’ll be okay.

Just once I knew what life was for.
In Boston, quite suddenly, I understood;
walked there along the Charles River,
watched the lights copying themselves,
all neoned and strobe-hearted, opening
their mouths as wide as opera singers;
counted the stars, my little campaigners,
my scar daisies, and knew that I walked my love
on the night green side of it and cried
my heart to the eastbound cars and cried
my heart to the westbound cars and took
my truth across a small humped bridge
and hurried my truth, the charm of it, home
and hoarded these constants into morning
only to find them gone.